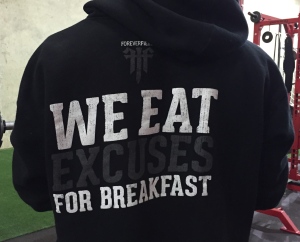 A few years ago I was in a running group.  Our coach was an Australian woman who had completed multiple Ironman competitions.  Nothing stopped her.  My doctor wasn’t real keen on my running but more than anything I wanted to get back out on the trail and run.  My running coach was the one who helped get me running again after my diagnosis of Transverse Myelitis.

The running group was very interesting because among the 7 people in the group, we had 5 runners with health issues.  There was me with Transverse Myelitis and episodes of paralysis when I went to run; a person with an auto-immune liver issue who may need a liver transplant in the future; a person with Celiac disease; a person who had been battling Lyme disease since 2008; and another who had a brain aneurysm in her brain stem in 2009.  Every one of us had a pretty good excuse to say “I quit” and stay home.  Yet each of us was out there, giving our ailments the middle finger.  I would argue that being active was helping each of us stay alive.   Being around others with health issues also kept me motivated to keep going.  If they could do all this running, then I sure could too.  We did tease our coach who carried a cell phone for emergencies to remember to dial “911”, not “000” (the emergency number in Australia), if something bad happened to us during a run. 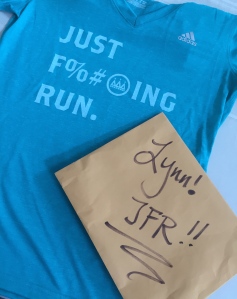 Rogue Running gave me this shirt to remind me – JFR

Rogue Running, the awesome running store in Austin that I wrote about last month, has a great catch phrase.  JFR, Just F%#@ing Run.  When I heard that catch phrase, I immediately understood what it meant.  It harkens back to that running group a few years ago.  There was plenty of opportunity to throw out an excuse to not meet up for the group run.  But we didn’t.  We sucked it up and went out for our run.  We just f%#@ing ran.

Excuses don’t just have to be physical aliments.  They are anything that keeps you from lacing up your shoes – a bad day at work, being too tired, it is too cold (or too hot), it’s raining, whatever it is that stops you from getting out there.  Just don’t give in.  Sometimes a good run will cure whatever is bothering you anyway and afterwards you will wonder why you were reluctant to go.

I remember when I was a little kid, my excuse for anything I didn’t want to do was “I can’t.”  That is about the laziest excuse one can have.  My mother’s response was always the same: “Can’t never did a thing in its life.”  I won’t let “can’t” stop me anymore.

So if you were looking for an excuse not be active – remember you don’t have to run, walking or biking are fine too – it had better be a really good one.  Because if the motley crew that was my running group can get out there, everyone else should too.

Runner’s World had an interesting essay on Rogue Running’s JFR catch phrase.  It hits pretty much every excuse someone could have.  Maybe you’ll recognize a few of yours in there.

If you live in the Austin area or even if you are just visiting, stop in Rogue Running.  I have seen plenty of running stores all over the country during the course of my travels.  This is by far one of my favorites.  And if you can’t get to Austin, you can always travel with Rogue Expeditions on one of their “run-centric vacations” to places like Morocco, Kenya, Patagonia, Lake Tahoe, and Bend, Oregon.  Their trips accommodate runners of all levels and enable you to truly experience each destination.  Sounds like an exciting adventure to me!