Recently while flying to a race, I thought about how silly this all seems – traveling to 50 states to run endurance events.  Aren’t they all the same?  How can any race be different?  26.2 or 13.1 miles is the same not matter where you run it, right?  My most recent race in Fargo, North Dakota reminded me that every place is different and every race is unique in its own way. 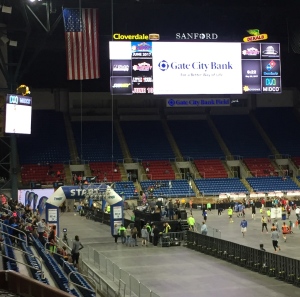 The start line inside the Fargo Dome

The Fargo Marathon/Half Marathon claims that it is “fast, fun and friendly”.  I ran the half marathon and I have to agree.  Fargo is very flat and the few “hills” we had were mere bumps in the road compared to other places.  The only course that is flatter than the Fargo Half Marathon is the Arena Attack I ran in Hartford, Connecticut.  Funny thing is both the Arena Attack and the Fargo Half have one thing in common.  A portion, if not all, of the race is run in an arena.  The Arena Attack was run entirely inside on the concourse of Hartford’s XL Center.  The Fargo Half started and finished on the arena floor inside the Fargo Dome.  We only ran a short distance inside before heading outside to run through the streets of Fargo and neighboring Moorhead, Minnesota.  We finished up back inside the Fargo Dome too.  For marathoners looking for a BQ (Boston Qualifier), this is the race for you!  Flat and fast.

Over 1 mile of elm trees lining the course

Although the whole idea of starting and ending inside sounds a bit odd, there are many benefits.  There were plenty of restrooms for runners to use before the race – much nicer than port-a-potties.  The temperature inside the arena was controlled so we didn’t need toss clothes at the start or space blankets at the finish to keep warm.  There were plenty of seats inside for spectators to sit and cheer for the runners at the start and the finish plus they could watch the action along the course on the Jumbotrons.  That would be the best way to watch a race. 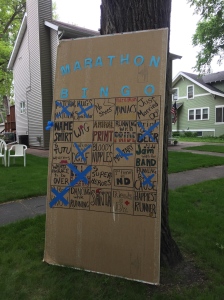 These spectators had a fun way to enjoy watching the race

The residents of Fargo were very welcoming.  I stopped along the course to take a picture of an elm tree-lined street and started talking to a woman about her beautiful trees and Dutch Elm disease.  She ended our conversation by asking me to come back for next year’s race.  People living along the course definitely enjoyed the race.  They had some of the best signs.  Usually I see the same old signs at every race.  Not in Fargo.  They came up with very unique and creative signs to keep the runners laughing.   They put EZ-up tents in their front yards and were handing out water, licorice, and fruit (including peeled oranges).  It looked like many of them were treating race day like a big party.

The Fargo Marathon/Half Marathon boasts over 58 locations of bands or DJs along the course.  They had entertainment I had never seen before.  I saw a group of bagpipers, one of whom was playing a bag pipe that looked like a shaggy dog.  There was a group of Norwegian accordion players.  My favorite was the Dancing Cowboy – a cowboy who was dancing as I ran by to Pitbull’s “Timber”.  He looked like he was having a great time.  I heard songs I haven’t heard in years along the course too, including the Prince song “Let’s Go Crazy”.  All the entertainment made the race a lot of fun.

When I finished, they had pizza, fruit, bagels, donut holes and cookies for the runners.  As I ate my post-race treats, I watched runners finish.  I can’t think of another race where I was able to hang around after I finished and watch the rest of the race.  It was exciting to hear the announcer say “another Boston Qualifier finishing!”  Everyone in the arena would cheer.

While I wasn’t particularly fast in this race (I did stop to talk to someone about Dutch Elm disease, that cost me some time), I have to agree it was fun and friendly.  If I decide to make my own BQ attempt, this is definitely a race I would consider running.

If you decide to run the Fargo Marathon or Half Marathon, be sure to save some time to see some of the local attractions.  For anyone who enjoyed the movie “Fargo” you can see the wood chipper used in the movie in the Fargo-Moorhead Visitors Center.  The staff there will even take your picture with it.  Just over the Red River in Moorhead is the Heritage-Hjemkomst Interpretive Center where you can see a 76-foot long replica of a Viking dragon ship, built in the 1980s in an abandoned potato warehouse and successfully sailed from Minnesota to Norway. 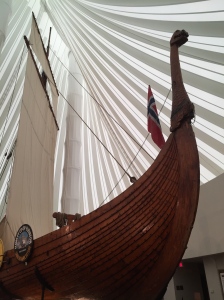 2 thoughts on “I Ran Far in Fargo”