When is a race trip not fun?  When you get to the airport and check your race results online and they don’t show you finishing the race.  This happened to me in May when I 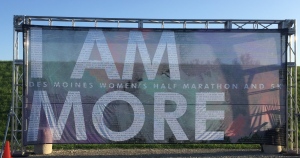 went to Iowa to run the Des Moines Women’s Half Marathon.  I had a few nerve-racking hours before I was able to get the issue resolved.  My experience is a good lesson about how race timing devices work and what a runner can do to minimize the possibility of a timing issue. 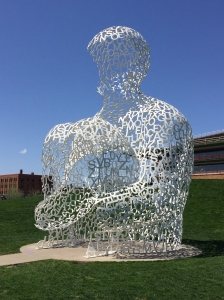 “Nomade” by Jaume Plensa in the sculpture park

Before I tell you more about my timing issue, let me say a few words about the race.  The race started and finished at a little winery.  All the runners were given Shape activewear 1/2 zip tops and an engraved stemless wine glass (to enjoy a post-race glass of wine).  I was surprised by how flat the course was – one of the flattest I have ever run.  Many of the runners were doing their first half marathon.  It always makes me happy to see people toeing the start line for the first time.  This was a great race for first timers.

Now let’s talk race timing.  Since I started running in 2007, I have seen a variety of methods used for timing runners in road races.  Simply put, timing a race involves capturing a runner’s identity (via bib number) and the time they crossed the finish.  In very small races they use manual methods, involving someone manually hitting a button on a handheld machine or pulling off a number on the bottom of my bib.  Manual methods don’t work for races with a large number of participants. 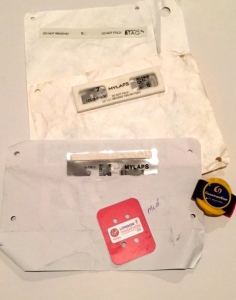 3 sample bibs with B-tags, a plastic transponder from the London Marathon and a yellow ChampionChip

Enter technology, specifically a passive RFID (Radio Frequency Identification) transponder (also known as a chip) that a runner wears.  When they run over a mat on the course, the transponder communicates with the timing device to capture their identity (i.e., bib number).  An audible beep sounds whenever a runner passes over a timing mat.  Timing mats are positioned at the start and finish lines, and, in longer races, along the course to ensure the runner has completed the full course.  There are many different kinds of chips: reusable plastic disks (a.k.a. ChampionChips), or plastic or cardboard squares that attach to the runner’s shoes; single use transponder tags that are attached to the runner’s shoes (D-tags); or single use transponders attached to the back of the runner’s bib (B-tags).  Looking at the bibs from my races, there appear to be several vendors providing bibs with B-tags.  Some look like a little strip of plastic while others have foam over an aluminum looking strip.

The Des Moines race used a B-tag transponder with a little strip of foam, which was attached to the back of the runner’s bib number.   Although the race directions state the runner should wear the bib on their chest, many runners attach them other places – on their thigh, on their back, or to the bottom of a race belt or hydration belt.  I have a Fitletic hydration belt with toggles to attach my bib.  That was how I wore my bib at the Des Moines race.

The race results showed me starting the race and passing over the first of three mid-course mats.  After that, I had no time.  I recalled running over a mat near the half way point in the race and not hearing any beeps.  I thought it was strange since it was the exchange point for the relay team.  I also didn’t hear any beeps at the next mat nor was there anyone monitoring it to ensure the equipment was working, another thing I thought was strange.

As I sat in the Des Moines airport, I synched my Garmin to the Garmin Connect app on my iPhone.  I took screen shots of the data from my race including my time, distance, and map of the course I ran.  I emailed the race director, explaining my problem and included the screen shots as evidence I completed the course.  Using these, he was able to confirm I did complete the race.  The official results were updated to show me as a finisher.

Until I received his email, I was very stressed.  I couldn’t imagine running a race and not having the timing mats capture me.  It made me wonder how often this happens; what the USATF (USA Track and Field) rules are for timing distance races; and whether there is anything a runner can do to ensure their run is appropriately captured.

When I got home, I did some research. I was surprised to learn that there aren’t any standards defined by the USATF for the timing equipment in distance races, just recommended best practices.  I found a few races where there were large numbers of runners whose times were not captured.  These could have been instances where the timing equipment was not functioning (e.g., the mats weren’t capturing transponders due to lack of a power source) or there was a large-scale issue with the transponder quality.  One USATF suggested best practice is to film the finish line.  The film can be used to identify runners whose time might not have been captured and validate them as finishers.  For this reason it is important for a runner to wear their race bib on their front and have it clearly visible.  The 2018 Boston Marathon is a good example of this.  Because of the miserable cold, rainy weather, many runners experienced timing issues.  The humidity could have also interfered with the timing devices.  Runners were bundled up in jackets to fight off hypothermia and in doing so, covered up their race bibs.   The process of identifying them as finishers became more difficult and video of the finish line was used to confirm they finished.

As runners, we have to do our part to ensure our times are correctly captured.  While we can’t control the quality of the bib tag and the timing equipment, we can make certain we don’t bend or fold the bib tag.  Doing so will damage the transponder.  We should wear the bib on our chests.  This instruction might be difficult for some to follow if they don’t want to put pin holes in their race shirts.  Fortunately, there are reusable bib clips and bib magnets that can be used to attach your bib without putting holes in your shirt.  For some B-tag technology, close proximity to other runners can cause the timing device to not capture a runner.  That was something I was surprised to learn. 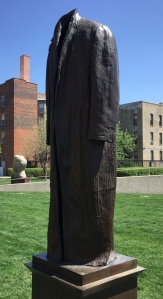 The expression “empty suit” comes to mind; another sculpture from the park by Judith Shea titled “Post Balzac”

Looking back at what happened during this race, I believe my bib may have gotten folded up under my Fitletic hydration belt, damaging the B-tag transponder.  However, I also did not hear the beeps when I ran over a timing mat nor did I see someone monitoring all the mats.  Those two things make me wonder if the timing equipment was working,  Regardless, I am very happy my timing issue was quickly resolved.  My Garmin was very helpful in providing evidence I completed the race.  Without that data, it would have been difficult for me to prove.  There weren’t any photos of me at the finish line and I don’t have access to any video tape that may have been taken at the finish.  From now on I plan to do my part by wearing my bib on my chest.  I just hope the timing equipment is working properly.