I tuned in the television to watch the New York Marathon last week and saw this ASICS commercial.  I love this commercial.  It captures the essence of marathoners.   Since I have been sitting on the sidelines, missing out on my fall races, this commercial helped me feel a bit of the marathon excitement.

Yes, people run dressed up in costumes.  It is fun to see how creative people can be with their running attire.  Runners dress up as all kinds of things – Disney characters, super heros, bananas, Gumby, you name it.  I remember seeing a group of runners at a race in Disneyland, each of them dressed as a character from “Alice in Wonderland.”  Their costumes did not hold them back either – they blew right by me.  When we ran the Dopey Challenge in Disney World, my running partner – a 6’ 3” former Marine – wore a gun metal sparkle skirt.  It was part of a fundraising challenge for the charity we support, the Ishan Gala Foundation.  In addition to raising money, he got many compliments on his outfit.   For his next race, I have challenged him to run dressed up as Tinker Bell as a fundraiser for the Foundation.  I can’t wait to see him in his green wings!

I had to laugh at the part of the commercial about hating and loving hills.  Like most runners, when I consider races to enter, I always look at the elevation map (or the EKG map as I call it) to see how many hills the course has.  Down hills are great – gravity helps pull you along.  But up hills can zap your energy.  And having a hill towards the end of a race is a real challenge.  Heartbreak Hill along the Boston Marathon course is at Mile 20, when runners are starting to hit “the wall”.   I ran up that hill that during the Heartbreak Hill Half Marathon last June.  I can see why runners don’t like it.  It was a real kick in the pants.

That first comment in the commercial – “We leave nothing to chance.” – I think is really a euphemism for runners are superstitious.  The commercial opens showing a runner first in bed, gear all laid out next to them, and then preparing for a race.  The way that runners get ready for a race is almost a ritual.  All that preparation is to avoid things like blisters and chafing.  I do the same thing. I have my gear all ready for me to get dressed in those early morning hours before a race.  I have an order in which I get dressed too – always the same order too.

But I know many runners, myself included, take this a bit further.  For example, I always wear the same running bra for every race – always the light green one.  I don’t wear it in training runs, only when I race.  I don’t know if I think it is “lucky” or gives me any special ability on race day.  I just know I would be uncomfortable wearing any other bra in a race.  At those recent back-to-back races, I had to wear a different bra for one of the races.  I am embarrassed to admit I felt uncomfortable racing when I wasn’t wearing the green one.  I dread the day when the green one is worn out.

Recently I was cleaning out my closet and I came across those shoes.  You know, the ones that I was wearing when I fell and broke my arm.   Something about those shoes gave me a bad vibe and I have to admit I was reluctant to wear them again.  Sounds silly but those shoes have some bad juju.  I don’t need that hanging around.  I packed them up and took them to my favorite sports store to toss in the shoe recycle box.  Nope, don’t need them.  I am training for the Tokyo Marathon in February.  I am sticking with new shoes that hopefully don’t have any bad juju.  I don’t have to worry about the clothes that I was wearing when I fell.  They had to be cut off of me and were thrown away. 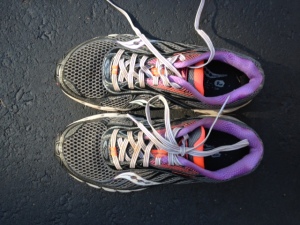 In many ways, I feel like I am starting all over as I train for Tokyo.  I am doing many of the same things that I did when I trained for my first marathon.  I visualize running the course as I run my training runs.  I printed out the course map and am highlighting the equivalent distance on the map that I have covered in training.  I hung it on the refrigerator so that I can see it.  Seeing how much of the course I have covered in my training runs reassures me that I can complete the race.  I am traveling a long way and I want to make sure I can finish.

When I fell in September, I had been training with the goal of getting a PR in Berlin.  I decided not to put any pressure on myself for Tokyo and just train to enjoy the race.  This is my first international race and it will be a very different experience from any other marathon that I have done.  I can feel the excitement of race day building up already.   The theme for the Tokyo Marathon is “The Day We Unite”.  For me, it will be the day I get reunited with my fellow marathoners. 🙂