I usually tell people that there are 3 kinds of marathons (perhaps a bit oversimplified).  First, there are the runDisney races where you run through the various theme parks at Disneyland and DisneyWorld.  Those races are extremely popular with runners who love anything Disney and will even run dressed up as Disney characters. When I ran the Disneyland Half Marathon a few years ago, I was passed by a group of about six runners who were all dressed as characters from Alice in Wonderland.  Running a Disney race also gives runners an excuse to make it a mini vacation and enjoy the parks.

Finally there are stand-alone races that aren’t associated with any big race series.  Some of them are small but all of them have a unique charm because of their location, theme or something else.  I have picked a lot of these for my 50 state endurance challenge races.  They are perfect for a “funatical runner”.   I would put Grandma’s Marathon in Duluth, Minnesota in that category.  I loved that race and hope to run it again some day.

There is one race that stands separate from all of these.  That is the Marine Corps Marathon (MCM).  There is something very special about that race.  That one I tell people is like going to church.

The MCM is often called the “People’s Marathon” because there is no prize money for the winner.  With no prize money, none of the elite (professional) runners compete.   You don’t need to qualify to run the MCM either.   The race attracts all sorts of runners including enlisted men and women, seasoned runners, first time marathoner, and even celebrities (probably the most famous being Oprah Winfrey).  The 40th MCM was held this past weekend and I ran the race with my running spouse, Rich.  It was my third MCM and Rich’s fifth.  It was as special this time as it was the first.

I remember very well the first time that I ran the MCM.  It was a tough race.  The day before it had snowed but they made certain that the course was safe and clear of snow and ice.  I was amazed at the number of Marines along the course, handing out water, holding flags, cheering the runners.  There were more spectators than any race I had ever done.  There were very few places where there weren’t any cheering people.

After I crossed the finish line that first time, I stopped to rest and started crying.  A tall handsome Marine came over and asked me if I was ok.  I nodded.  He asked me if it was my first marathon.  Through my tears, I said “no, but it is the first time that people will think that I have run one.”  Everyone knew the MCM and would ask if I had run it.  I had previously run 4 marathons but for some reason they didn’t count to them.  Perhaps it was because the races had Disney or Rock ’n’ Roll in their names.   In their eyes, I would finally be a marathoner.

When I ran the MCM with Rich two years ago, I realized why I thought this race was so special.  It hit me right between Miles 6 and 7.  I was running with Rich when I looked up at the young woman runner (probably in her 20s) in front of me.  On the back of her shirt was a photo of a soldier with the words “My Husband/My Angel” and dates of his birth and death.  I stopped running and started to cry.  Rich asked me what was wrong and I pointed to her shirt.  This was a common sight among the runners with a fallen serviceman (or woman) remembered on their shirts. 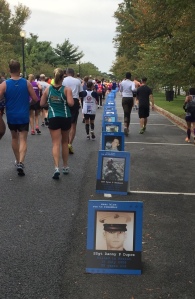 The Face of the Fallen along the Blue Mile

This year I was doing pretty well until we hit the Blue Mile at Mile 12.   This section of the course was where fallen service members were honored.  Along both sides of the course were “Faces of the Fallen” posters showing a service member in a photo – alone or with their families – with their name and their age when they died.  It was a sobering sight to see a poster of a soldier who died at 19 or Marine with his young sons who died at 33.   Towards the end of this section there were volunteers with flags standing on both sides of the course, cheering us on.  Each flag had a black ribbon with the name of a fallen military member.  A sign that I saw stated it best – we run to honor the service and sacrifice of the American military.

Sunday’s race was a tough one for both me and Rich.  I haven’t done much running since I ran the Berlin Marathon in September and got my PR.   Life got in the way of Rich’s training.  The longest he had run was 13 miles well over a month before the race.  Neither one of us was in peak condition for this one.  Rich’s wife made me promise that I would not let Rich run too fast.  It wasn’t a hard promise to make; I didn’t want to run this one too fast myself.

It was fun to be out there running with Rich again.  We settled back into our routine – yes, someone asked me if I was his wife.  He wasn’t too embarrassed when I stopped to pick up coins that I found on the road as we ran, including the one pressed into the asphalt that I couldn’t get up.  But this time we didn’t argue in the middle of the 14th Street Bridge.  When he said he had to slow down for the last 5 miles, I decided to keep plugging along.  Although my ankle was bothering me (the one I twisted in Berlin), I wanted to be done with the race.  As it turned out, I only finished about 10 minutes ahead of him.

A lot of runners cry when they finish a marathon, especially first timers.  I never cried when I finished my first marathon but I have cried every time that I crossed the finish line of the MCM.  There is just something about that race that gets me every time.  At the end of the race, Marines stood on either side of the finishers’ chute and thanked us for running. I shook the hands of every one of them and thanked them for what they do. I pray next year that these bright strong young people won’t be a name on the back of someone’s shirt or on a poster along the Blue Mile.

Despite what might seem depressing to some, this is my favorite race. It is inspiring to see the wounded warriors with their hand cycles or running blades and cheer for them. And I am not alone. I passed a woman who was running AND talking on the cell phone. I heard her tell the person on the other end how special this race was and that they had to do it together next year (we weren’t even to mile 15 yet and she hadn’t even seen the medal!). The fourth largest marathon in the US but #1 in my book!

I found this YouTube video that shows the Blue Mile from the 2012 MCM.  It will give you an idea of what the Blue Mile looks like as the runners pass by.

There are lots of different bands along a marathon race course but my favorite will always be the Batala Washington DC group.  These women drummers are incredible.  Here is a video from their 2012 performance at the National Cherry Blossom Festival.

I also found this interesting video that explains a bit more about the Batala group:

2 thoughts on “The Marine Corps Marathon”