I run a lot of half marathons and marathons but in reality, for me they aren’t races.   As the funatical runner, I am drawn to races with themes such as the Flying Pig or the MO’ Cowbell, or races that allow me to run some place interesting, like down the Las Vegas Strip at night.  It is a great way to see the sights while running.  I have never viewed  any of them as true “races”.   It is just a bunch of people getting together to run and have fun.

Last spring I heard about the inaugural USA Half Marathon Invitational.    A group of running enthusiasts saw that there wasn’t a comparable event like the Boston Marathon for the half marathon distance.  They wanted to create a half marathon that was more about competition than entertainment.   They created the Invitational along the same lines as the Boston Marathon where runners would have to qualify for the race by running a half marathon within defined qualifying standards.  I was curious to see where I stacked up for this event.  I had run quite a few half marathons early in the year.  When I checked the qualification standards, I was surprised that I qualified under the Open Division criteria.   I realized that I may never qualify again so I immediately entered the event.  This was going to be the real deal – a half marathon race. 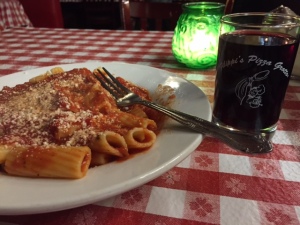 Five days before the race I learned that the course would have a time limit of two and a half hours (translating to a 12-minute per mile pace).  Most of the half marathons I run have time limits of between three and four hours.  While I can run much faster than that, it is always reassuring to know that I have a buffer if things go wrong on race day like they did at the Rock ’n’ Roll Savannah Half Marathon two weeks earlier.   I wasn’t the only one nervous about the course time limits.  Several runners that I talked to at the Expo were nursing injuries and didn’t feel they were in top shape.   My ankle was still not 100% either.   Additionally, there were 6 course cut-off points.  If I got to one of them too late, they would pull me from the course.  I was so worried about those cut-off points that I wrote all of them on my arm the morning of the race.

Before the race start I looked around at the other runners.  This race was different than other half marathons I ran this year.  There weren’t any runners dressed up as Disney characters or wearing sparkle skirts.   Everyone I saw was dressed for speed.  I wondered how many of them normally went “shopping” at the start line of a race or stopped to pick up coins along the course.  I think I was probably the only one.  (I didn’t shop at the start line this time but I did pick up a dime during the first mile of the race.)

The first few miles of the course took us from downtown San Diego up into Balboa Park.    Some of the runners were not use to hills and had a difficult time during those first miles.  I was so anxious about keeping up my speed that I was having trouble getting my breath.  Then I remembered something that my running coach, Leanne, told me to do to control my breathing.  She told me to sing or talk out loud.  I started repeating a mantra out loud as I ran.  I probably looked like a crazy person to the runners that I passed but within a mile I had my breathing under control.

As I approached the 10K point in the race, I noticed a man along the side of the road. Runners were yelling to him, and running over to the side of the course to greet him.  It was Meb Keflezighi and one of his daughters.  Meb was giving high fives to the runners and posing with them for selfies.  How incredible is that?  In the ultimate role reversal, the runner we have all cheered for during the Olympics, the New York City Marathon and the Boston Marathon was standing along the side of the course cheering for us.  Yes, I stopped for a selfie with Meb.  I was amazed that this incredible athlete was standing there cheering for runners much slower than him.  I have met Meb before and he is the most gracious athlete that I have ever had the honor of meeting.  Later I heard many other runners comment that seeing Meb along the course gave them the motivation to push harder during the rest of the race.  We had just had an encounter with one of the greatest marathoners ever, perhaps a little bit rubbed off on us. 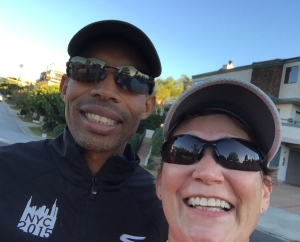 After I crossed the finish line, I stopped and started to cry.  Although it was not my best race this year, I finished it without being pulled off the course.  I had done it.  For the first time in my life I had actually raced.   As I stood there crying, a man wearing a USA Half Marathon Invitational jacket came over to me, probably to make sure that I wasn’t hurt.  I recognized him immediately as Meb’s brother, Merhawi Keflezighi (or Hawi).  Hawi’s company helped organize this race.  Hawi was as gracious as Meb.  He smiled at me and gave me a big hug as I cried on his shoulder.  I composed myself enough to say thank you.  I wish I had thanked him for helping to create this event.  It was a chance for me to test myself as a runner and to actually race.  The weeks leading up to the race had been challenging and despite not being in top form, I did better than I thought I would. 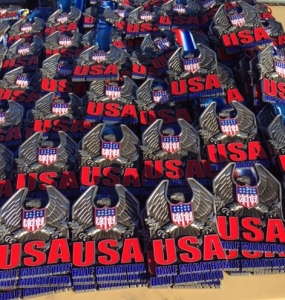 When I went to San Diego, I thought that this would be a “been-there, run-that” kind of event for me.  But when I got back home, I realized that participating in this race has motivated me to improve my running skills.  How well could I do if I really prepared for the race?  I will never know unless I try.  I hope that the USA Half Marathon Invitational is held again and that I can still qualify.  I want to run it again and see if I can do even better.