There are fascinating people you can meet when you take that first step to say hello.  We were reminded of that during our recent vacation in Montana.  While passing through Bozeman, we stopped for lunch at one of the restaurants along Main Street.  I noticed a bicycle, loaded with gear on the front and back, leaning against the railing separating the dining area from the sidewalk.  I pointed to the bicycle and told my husband it probably belonged to someone who was riding across country.  We looked up to see a tall slender man, wearing bike shorts and carrying a bike helmet, walking past our table. My husband (whose preferred activity is bicycling) greeted him and they chatted.  Turns out, Ben, the bicyclist, was biking across the US.  It was a dream he had for years.  Someday he was going to do it.  When he retired, Ben started to plan his trip and someday started to get a lot closer.    Now here it was.

In one of those “It’s a Small World” moments, it turned out Ben lives about 50 miles from us.  Since we are practically neighbors back home, we asked Ben to join us for lunch.  He didn’t hesitate.  With beers and food ordered, we sat back to hear about Ben’s adventures as a TransAmerican bicyclist.

As we ate, we peppered Ben with questions.  When did you start your cross-country trek? Mid-April.  How many miles have you biked? About 3,400 with another 1,200 to go before finishing in Oregon.  How much does all your gear weigh? 75 pounds.  Where do you sleep at night? Outside, sometimes along the road, sometimes in a hotel.  What do you do if your bike breaks down?  Carry spare parts like extra tires and inner tubes.  How many flat tires have you had so far? Two (the first when he took his bike into a hotel room and a tack in the carpet pierced his tire).  Did you sell everything you own to do this? No, just his truck.  He will buy a new one to drive back home from Oregon when he finishes.  When do you think you will finish? October.

Ben was taking his time on his trip.  Typically, I hear about bicyclists crossing the country in 14-20 days, traveling from west to east.  Ben was taking a different approach.  He had started in the east (Delaware) and was heading west.  This wasn’t any mad dash for him.  Ben was visiting friends and family along the way.  Some places he would stop to go to a baseball game.  In others, he would rent a car and make a side trip for sightseeing before hopping back on his bike to continue his journey.  Ben takes a couple of days off too, only biking 5 days a week.  To plan his route, Ben worked with the Adventure Cycling Association.  Their headquarters is located in Missoula and Ben planned to stop by to say hello.

As Ben talked, I noticed that our waitress would linger each time she stopped at our table.  She was listening to Ben talk about his experiences.  I watched her eyes get bigger and more full of life as she listened.  Finally she explained she wants to go on a similar adventure and is trying to convince her husband.  She wants to start with a bike ride through Glacier National Park. She has some fear of what she might encounter.   “Could I really do it?”  Ben assured her she could.  All she needed to do was get a bike and start training. 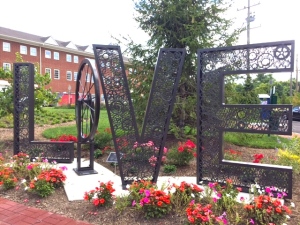 It was a fun lunch.  I enjoyed listening to Ben’s stories and making a new friend in the process.  When we left the restaurant, I found I was as excited about Ben’s journey as he probably was.  While I don’t think riding across country on a bike is in my future, I admire Ben for doing it.  I look forward to getting together with him again to hear about the rest of his trip.  It certainly is an incredible adventure.

Interested in a cycling adventure of your own?  Check out the Adventure Cycling Association’s web site for ideas, tips, routes, maps, and more: https://www.adventurecycling.org